Your Discord tag: Ahota#0001
Your Discord ID: 382053730272673792
What were you banned from? The BoxBot Discord Server
Why were you banned?: Reacting with NSFW emotes. Final warning after ban.
Why should you be unbanned?: I think I was wrongfully banned, where a simple verbal warning would have been sufficient. I do believe that I was in the wrong, but I believe that a perma-ban was too harsh of a punishment for something this minor (considering the emote was not a pornographic image, but simply the word "cum" in black text on a white background). Though Bongo states "you're not supposed to break rules after appealing", I believe that I should not have been permanently banned, due to the fact that my probation period had already ended. On top of this, I cannot find anywhere in the BoxBot server ruleset where it says banned members will be permanently banned again if they violate any rule, no matter how small. Addressing the probation period discussion, as stated by Jonterio in their response to my previous punishment appeal, "[Ahota] will be put on a 1-warn=perma ban for a few months." This appeal response was posted on August 4, 2019, which is exactly 3 months before the date of this appeal. 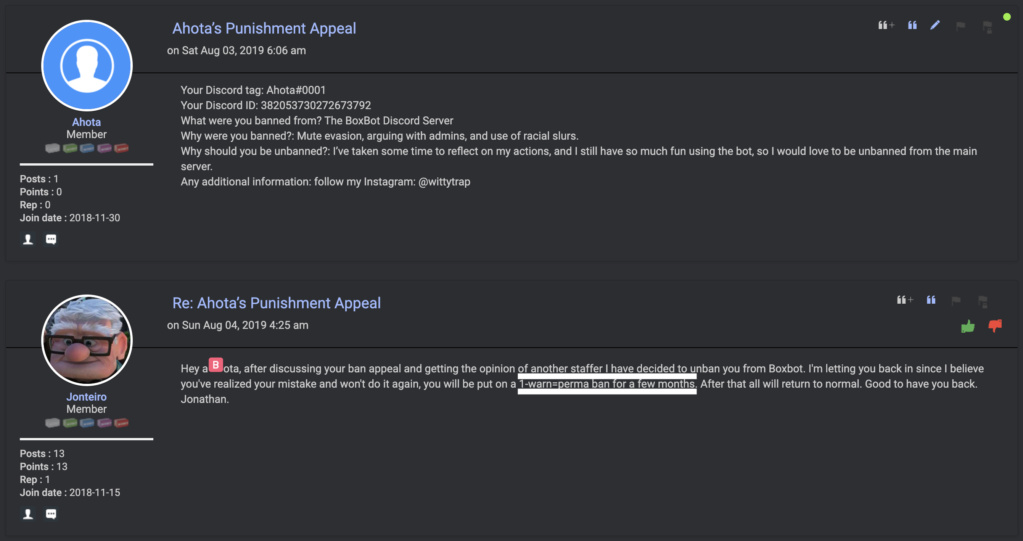 At the end of the day, I love the BoxBot community, and even though I occasionally do get up to shenanigans, I would love to be unbanned so I can continue to contribute to the Official BoxBot Discord server. If I'm unbanned, I'll be 100% sure to stay out of trouble with staff in the future.
Thank you for your consideration <3
-Ahota

Sorry for any inconvenience, but you will not be unbanned. You were unbanned on good faith that you would be a good member of the server, and with the reasonable condition that you would be on probation for a significant amount of time. You were never notified of being removed from probation, and as such remained on probation given the vagueness of the unban restrictions. As such, as a result of you breaking chat rules while still on probation, you will stay banned and will have no chance of further appeal. Thank you for your interest in the server, but we shall part ways here.